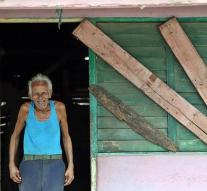 havana - Hurricane Irma has been drawn across the Sabana-Camagüey archipelago, a series of small islands close to the North Cuban coast. There are no reports about victims.

A weather station on one of the islands saturday morning (local time) wind speeds of about 200 kilometers per hour. Thousands of archipelago residents were placed in emergency shelters by the authorities, mostly in schools. The Cuban government had given a storm warning on Friday for most northern provinces, but the consequences of Irma, as well as material, seem to coincide.

Above sea, Irma is currently recruiting and strives on Florida where it will land on Sunday. On the Florida Keys, an elaborate ribbon of about 1700 islets, the wind woke up on Saturday. The meteorologists have warned of extreme high tide.

In the US state of Florida about 5.6 million people have been called to evacuate to safer places.