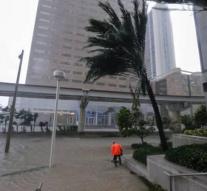 naples - Hurricane Irma continues his way through Florida. Despite the fact that the storm has diminished, Irma has already caused much nuisance in parts of the US state. Especially the abundant water that the hurricane entails poses problems.

Miami Airport, among other things, ran into water damage and may only open again on Tuesday. In the city itself the streets are white, their trees are blown and there is damage to houses.

The hurricane came to land on the other side of Florida, at Marco Island. Through the west coast, Irma is heading north. In coastal areas like Naples, Fort Meyer and Sarasota, rapidly rising water causes life-threatening situations.

Now the night begins in Florida, the national weather service calls residents to stay in. Floods take place in Florida with Hurricane Irma. At night it's impossible to see '', warns the weather institute.

More than three million households and businesses are seated without power. According to Florida's largest energy company, it takes weeks to recover everything.

To help help through the federal government, President Donald Trump has declared Florida a disaster area. According to Trump, cooperation between emergency services is proceeding well, but 'the bad news is that this is one big monster'.