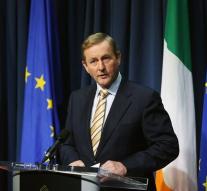 - Irish Prime Minister Enda Kenny will be Tuesday at the European summit to insist that his country deserves special support and attention. After Brexit guarantees for Ireland much more at stake, Kenny said before his departure to Brussels at the parliament in Dublin.

The departure of the United Kingdom will be in Ireland, which has very close ties with the kingdom, arriving very hard from the European Union. Ireland's economy is closely intertwined with the UK and in Britain (excluding Northern Ireland) dwell 850 000 people born in Ireland. Due to the massive migration of Irish people looking for work in English industrial towns, many Britons Irish roots.

A large part of the Irish region Ulster and Northern Ireland, part of the British Empire. That is hotly contested and the peace agreement in 1998 that defused the conflict is by getting the Brexit at risk.