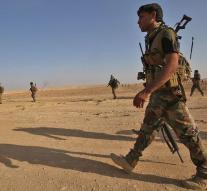 - Iraqi soldiers on Monday invaded the city of Mosul. According to officers, they reached the district of al-Karama, which is more than five kilometers east of the center of town.

The army along with militias of Kurds and Shiites on October 17 launched an offensive to expel the terrorist organization Islamic State (IS) from the city. Karama is part of the newer part of the city on the east bank of the Tigris River. The center of Mosul on the west bank of the river.

Mosul was captured by the IS extremists in June 2014. It is the second city in the country and stay still about a half million people. Approximately half a million people since June 2014 fled the city. Mosul is the major Iraqi stronghold of the terrorist organization Islamic State (IS), which is mainly led by former Iraqi soldiers.

Warriors IS defend their stronghold including by citizens to abuse as human shields. They also have oil wells set on fire and bombard their enemies with snipers and suicide attacks.