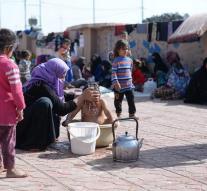 mosul - About five thousand people, mainly women and children, in recent days have fled the Iraqi city of Mosul and pulled into a crowded Syrian refugee camp. Another thousand others are on the way and stand on the Iraqi-Syrian border.

That said Wednesday the charity Save the Children. It is the first report of a large group of refugees leaving the city. The Iraqi army continued Monday with Kurdish fighters in an offensive to liberate the city from Islamic State. The fights themselves have not yet reached the city on the Tigris. From Mosul to the Syrian border, a distance of about 100 kilometers.

The Syrian camp called al-Hol. The employees of Save the Children to assess the situation as deplorable. It is littered with garbage and excrement, so anytime diseases could break out. There are sixteen toilets for nine people.

The United Nations estimates that eventually 100 000 inhabitants could flee Mosul.