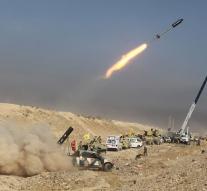 baghdad - An Iraqi Shiite militia, al- Mukhtar, has claimed responsibility for the attack on a camp of Iranian exiles. About fifteen rockets were fired at the camp, leaving 23 exiles were killed. Many others were injured.

" We have warned the members of this terrorist organization to leave Iraq as soon as possible. If they do not do that there will be more similar attacks follow ", said the commander of al- Mukhtar al Battat Wathiwq opposite the Iranian news agency Fars.

The exiles living in the old American military base Camp Liberty, near the Baghdad airport. They have lived since the time of former dictator Saddam Hussein in Iraq. The opponents of the Iranian Shiite religious leaders. Under the new Shiite-dominated Iraqi government, they are actually no longer welcome in the neighboring country. They therefore live since 2012 at Camp Liberty.

The rockets, according to the Iranian authorities fired from the district Bakriya, about six kilometers from the airport.

The United States has urged Iraq to improve the security of the camp. Also wants the Foreign Minister John Kerry that the perpetrators are brought to justice.