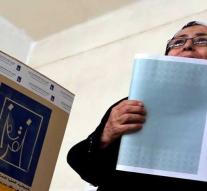 baghdad - An Iraqi warehouse with cast votes from the recent parliamentary elections has been set on fire. The Ministry of Defense announced that all ballot boxes and ballots were destroyed at the Baghdad depot.

The ministry did not comment on the number of ballots that were lost. These are notes that were issued at the parliamentary elections in May.

The current parliament last week agreed to a recount of all votes cast during the elections. That happened a day after Prime Minister Haider al-Abadi had mentioned serious irregularities during the ballot box. The party of Abadi did not go beyond the third place in the elections.

The authorities have not made any statements about the cause of the fire. The firefighted warehouse is located in the al-Rusafa district, which lies east of the river Tigris.