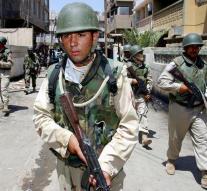 The university complex is located in the north of the city on the east bank of the Tigris River. The center of town is on the western shore, about 3 kilometers from the university.

In 2014 entered the Sunni extremists of the Islamic State (IS) the great city under foot. The Iraqi army is trying to recapture the past three months with Kurdish fighters and Shiite militias Mosul. In the modern east of the city's neighborhoods IS recaptured.