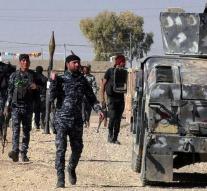 baghdad - The Iraqi army on Saturday again made gains at the expense of Islamic State. At about 15 kilometers south of Mosul was the town of Hammam al-Alil recaptured. That made the head of the Iraqi police announced.

After earlier successes in the east of Mosul this is a new boost for the Iraqi army. The city and Mosul is located on the Tigris, according to the police chief is under full control and waving Iraqi flags now on the government buildings again. Before IS the town was in the hands, Hammam al-Alil were an estimated 65 000 people.