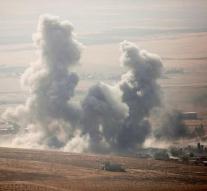 mosul - A brigade of the Iraqi army, the terror group Islamic State (IS) Monday delivered a sharp blow to the advance towards Mosul. An army spokesman told CNN that IS has suffered heavy losses to fighters and equipment.

According to the Iraqi army soldiers and their allies march on Hamdaniyah southeast of Mosul. CNN reported that fighters IS possible oil wells are on fire. The black smoke, the terror group would fire to obstruct the view of the Iraqi Army and want to delay the advance towards Mosul.

The international coalition against IS Monday bombarded from the air some statements IS near Mosul.