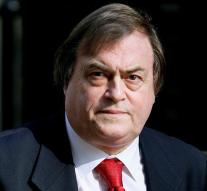 london - The American-British invasion of Iraq in 2003 was 'illegal'. So says the former British Deputy Prime Minister John Prescott, who held this position at the time of the Iraq war. The he says that he that 'disastrous decision' will have to live.

Prescott took the newspaper to his then-Prime Minister Tony Blair. Under his leadership, the government members did not get enough information. That led to a wrong decision motivated for Blair's unwavering support to the US

Prescott says now to admit regret that former Secretary-General Kofi Annan was right when he condemned the war. 'I think every day to the British soldiers who were killed or wounded in Iraq and the 175 000 Iraqi people deceased by Pandora's Box that we opened by turning off Saddam. '