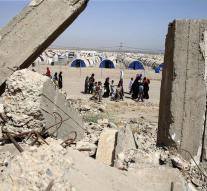 mosul - The Iraqi forces started an offensive on Saturday to get hold of the last occupied neighborhoods of Islamist state in the city of Mosul. That's what the army reports in a statement.

The Iraqi air force dropped Friday pamphlets over the second city of the country. It called on citizens to leave the neighborhoods concerned.

The area still occupied by the terrorist group includes the Old City of Mosul, where also the al-Nuri Mosque states where ISC leader Abu Bakr al-Baghdadi called out a caliph in Iraq and Syria in 2014, and three adjacent districts.