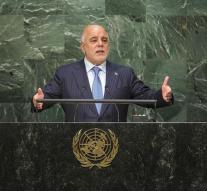 baghdad - The Iraqi parliament on Saturday approved a controversial law that gives a separate legal status in the predominantly Shiite People's Mobilization Forces, apart from the official Iraqi army. All Shiite blocks voted in parliament. Members of the Sunni minority boycotted the vote because they see no benefit in additional security forces besides the army and police.

The People's Mobilization, or Hashid Shaabi in Arabic, plays an important role in the fight against the Sunni terror group Islamic State. According to international human rights groups and the UN High Commissioner for Human Rights of the United Nations misbehaving militias however, often against Sunni civilians in towns and villages that were conquered back to IS.

The law does not specify how large the Hashid may be, or how many members must be from different populations. According to the government counts the corps now 110. 000 fighters, of whom between 25 000 and 30 000 Sunni and a few units with Yezidis and Christians. The Kurds in their autonomous region of its own militia, the Peshmerga.

The People's Mobilization is by law responsible to the prime minister in the Iraqi polity a Shiite. The army falls under the Defense Minister, traditionally a Sunni. This post is vacant after the resignation still Khaled al-Obeidi by parliament in August.