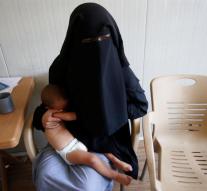 baghdad - The Iraqi authorities have transferred about 1400 foreign women and children of alleged IS warriors to a new location north of Mosul.

Foreign nationals in the country say they are very concerned about the 'extremely vulnerable' families.

The Norwegian Refugee Organization NRC announced that women and children were suddenly taken away in buses. In many cases they had to leave their personal belongings. According to a NRC spokeswoman, no relief agency was previously informed about the move.

The Iraqi army reported in a statement that the families were transferred to 'a safe location with better services. 'The women and children in the camp would come from, among others, Turkey, Russia, Azerbaijan and Tajikistan.

A spokeswoman from Unicef ​​said that there is still work to determine the nationality of some families. It is intended that they will be sent back to their home country in due course. Human Rights Watch expressed criticism of the arrest of relatives of alleged IS warriors who are not accused of anything.