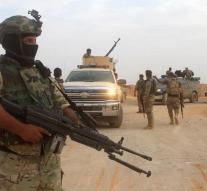 baghdad - The Iraqi forces have started an offensive to expel Islamic State from Hawija, a site about 240 kilometers north of Baghdad. Premier Haider Al-Abadi said Thursday on Iraqi television want to 'purify all terrorists from IS terrorists.'

Iraqi and international fighter planes started their air attacks in the area early this month, Al-Jazeera reported. The devices fired targets that were in the hands of IS. Abadi announced on Thursday that the offensive was formally launched.

The terrorist organization has already lost important bulwarks such as Tal Afar and Mosul in recent months. In Iraq, besides Hawija, IS has only one strip of land at the border with Syria. In the meanwhile, the jihadists are increasingly pushing in Syria.