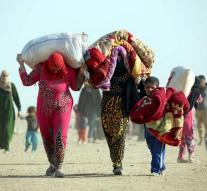 baghdad - Since the beginning of the Iraqi-Kurdish offensive on Mosul, according to the Iraqi government, 12,000 people beaten in the flight. Mosul is in the hands of Islamic State. Last Monday began the Iraqi army and Kurdish units to march on the city.

Mosul is an estimated two million inhabitants, the third largest city of Iraq. The city is the last major bastion of IS in Iraq. The attackers have already captured several villages in the area. The Iraqi army is now just a few kilometers from the city boundary.

According to aid agencies live the people of Mosul between hope and fear. On the one hand they look forward to liberation, on the other hand the associated violence is getting closer. The organizations consider certain 200 000 refugees when the fighting reached the city.