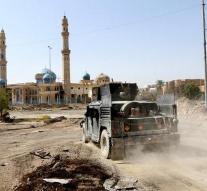 baghdad - Iraqi forces now have the last quarter of the city of Falluja retaken by fighters of the Islamic State group. That the General in charge of the operation said Sunday.

Prime Minister Haider al-Abadi claimed the victory at IS in Fallujah more than a week ago but was still fighting in the city, including in the central district of al-Julan. Lieutenant General Abdul Wahab al-Saidi left Sunday for the state,, from al-Julan '' know that the battle for Fallujah,, is over. '

In the battle for Falluja were slain at least 1800 opponents, al-Saidi said. Iraqi government forces were in combat air support of the US-led coalition and paramilitary forces, mainly Shiite militias.