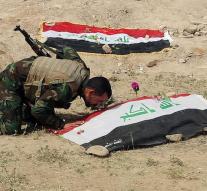 baghdad - Iraqi President Fuad Masum has authorized putting up 36 IS fighters who executed hundreds of men in 2014.

In the killings at the former US military base Camp Speicher near Tikrit, according to IS 1700 itself were mainly Shiite soldiers slain. The terrorists spread after the massacre gruesome photos and videos of executions. A year later, several mass graves were found.

A total of IS supporters sentenced to death in February forties. Thirty-six of them to be hanged this week

Survivors told by the Mirror horror stories about the massacre. Hundreds of soldiers were loaded into trucks and were told by the IS fighters that they would go home. Instead they were taken to a nearby river bed, put in a row and shot at close range.