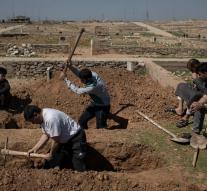 mosul - The Iraqi army accuses Islamic State buildings have blown up in western Mosul which dozens of people were killed. In a statement Sunday represents the military that there is no evidence that the building collapsed by recent air strikes by the US-led coalition. Not far from the house found a military car bomb.

The statement comes a day after the US announced to investigate the high number of civilian casualties by recent air strikes. Eyewitnesses possible two hundred people died in the air raids which were carried out between 17 and 23 March. The coalition confirmed an airstrike to have performed at the place where the civilian casualties have been reported.

The Iraqi military announced that a research team has removed 61 bodies from the rubble. It is unclear whether there IS fighters were killed.