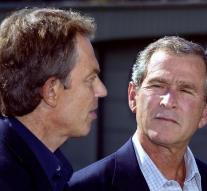 london - In the currently already chaotic British politics Wednesday eagerly awaiting the presentation of a study of the British role in the Iraq war. The report by Sir John Chilcot to former Prime Minister Tony Blair inflict heavy damage.

Within the corridors of the British Parliament to circulate all kinds of conspiracy theories surrounding the investigation. According to several British media were senior figures in the Labour Party and the Scottish National Party are planning to start impeachment proceedings against Blair as getting sharp criticism. That could mean that Blair never able to fulfill a function or even go to jail to it.

Labour leader Jeremy Corbyn, who voted against the war at that time, would stick to his position to condemn Blair. The confidence motion that was adopted at Corbyn last week that he laid down next to him, it would have had to occur.