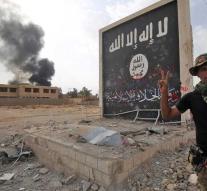 baghdad - Iraq has carried out an air raid on a command center of Islamic State in neighboring Syria. As a result, an unknown number of members of the terror group have died. They wanted to carry out attacks across the border. That's what an Iraqi army spokesman said on Thursday.

F-16 fighter planes bombed a building where IS fighters gathered. Once the jihadists occupied a third of the Iraqi territory, but they were almost all driven out or eliminated. Only in the border area with Syria do cells still cause danger.

'According to the intelligence service, the terrorists who had been killed prepared criminal operations with bomb belts. It was their intention to attack innocent people in Iraq in the coming days, 'said the military spokesman.

The Iraqi Air Force regularly attacks IS targets in Syria, with the approval of President Bashar al-Assad and of the US-led coalition fighting Islamic extremists.