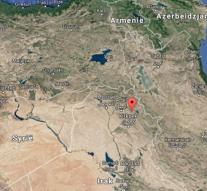 arbil - At an office of an Iranian Kurdish opposition group in northern Iraq late on Tuesday bombed. The explosion left six dead, report sources close to the Iraqi-Kurdish security forces.

The bomb exploded at the office of the Democratic Party of Iranian Kurdistan (PDKI) in Koy Sanjak, east of Arbil, the capital of the autonomous Kurdish region in northern Iraq. Who is behind it is unknown. In June and July there were fights between PDKI fighters and the Iranian Revolutionary Guards in northwestern Iran. When deaths on both sides.