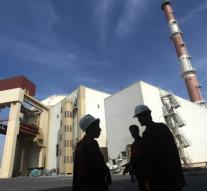 - Iran has worked mainly in 2003 to develop an atomic bomb. That the International Atomic Energy Agency IAEA declared Wednesday in a report. According to the organization after 2009 was no more such activities.

The IAEA says that there was for 2003 a " series of activities " and an organizational structure on the development of a nuclear weapon being. These activities, however, did not go beyond scientific studies into the possibilities and acquire technical knowledge. After 2009 there are no indications anymore.