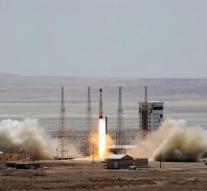 teheran - Iran has said 'successfully' a new ballistic missile tested. According to Iranian media, the rocket named Khorramshahr has a range of 2000 kilometers and can carry several core heads.

The test comes when the tensions between Iran and the United States are rising. US President Donald Trump announced this week that he may wish for the nuclear agreement from 2015. Teheran promised in that agreement to build its own nuclear program in exchange for revoking international sanctions. Trump repeatedly proved to be no fan of the agreement reached under his predecessor Obama.