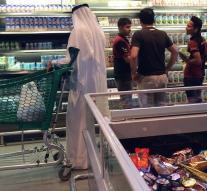 teheran - Iran has sent four freightplanes with fruits and vegetables to Qatar to prevent deficiencies in the oil state. A spokesman for Iranian airline Iran Air said this week against FARS press office that Iran wants to send 100,000kg of food to Qatar every day.

The small peninsula of Qatar has about 2.5 million inhabitants and imports 80 percent of its food. That often came from either Saudi Arabia or the United Arab Emirates (UAE). But a series of Arab countries have broken all ties with Qatar and Saudi Arabia closed the border.

The main reason is that Qatar maintains good relations with Iran, including the exploitation of a joint gas field. Saudi Arabia and other golfing states see in Shiite Iran an enemy that charges sunnians in the Middle East. The anger about Qatar's attitude came again in Saudi Arabia and the UAE after visiting May Donald Trump's visit to Riyadh. Trump violently attacked Iran.

The now isolated Qatar gets support from Iran and Turkey. Qatar talks with the two about the supply of food and drinking water.