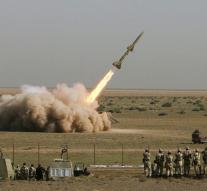 teheran - Iran has successfully launched a Simorgh rocket that can bring satellites up to 250 kilograms in a orbit around the world. 'With this successful test, Imam Khomeini Space Center has been officially commissioned,' state television reported Thursday.

That news will further worsen the tense relationship with the US. The Americans are worried about Iran's rocket program, with the possible development of ballistic projectiles, and announced new sanctions.

Tehran maintains that the now opened complex is only meant to bring satellites into space, including preparation, launch, guidance and control. The US claims Iran from 'malicious activities' in the Middle East. These undermine any 'positive contribution' of the 2015 agreement on limiting the nuclear program.