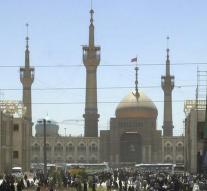 beirut - The Iranian Revolutionary Guard has destroys missiles on Sunday in eastern Syria. The attacks were aimed at bases of extremist groups which, according to Iran, were responsible for the recent terrorist attacks on the Iranian parliament and the mausoleum of Ayatollah Khomeini in Tehran.

Because of the rocket launches from the west of Iran on the camps near Deir al Zour, a 'large number' of terrorists would have been killed. Materials and weapons were also destroyed, said the Garde.

Terrorist Group Islamic State claimed responsibility for the action in Tehran. The Sunni extremists are sworn enemies of the Shiites who form the majority in Iran. Iranian officials said, however, that Saudi Arabia, Iran's Sunni rival in the region, was behind the attacks.

The Iranian Revolutionary Guard fights in the civil war in Syria alongside the regime of President Bashar al-Assad.