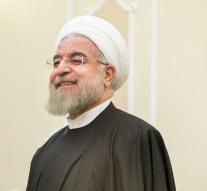 tehran - Iranian President Hassan Rouhani finds that it is for Muslims to improve the image of their faith, which has been affected by the violence of groups like Islamic State.

Did we ever think that not the enemy but a small group within the Islamic world would present Islam as the religion of murder, violence and extortion , he spoke Sunday at a conference in Tehran?. It is our greatest responsibility to improve the image of Islam in the world public opinion.

In his speech, which was broadcast by state television, the reformist president criticized the Muslim countries that mention all the killing and bloodshed in Syria and Iraq. Iran condemns Islamic State, which is fighting against the governments of both countries.

For a leader of Iran are such observations special. The country often gives the 'enemies of the faith 'to blame for the problems in the Middle East.