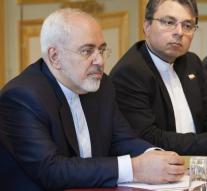 - For the first time in about ten years, Foreign Minister of Iran brings back an official visit to the Netherlands. Mohammad Javad Zarif talks Thursday among others with Prime Minister Mark Rutte and Minister Bert Koenders of Foreign Affairs.

The relationship between Iran and the West is thawed last summer after an agreement was reached on Iran's nuclear program. Since then, Western ministers traveling frequently to Tehran in hopes to get their share of the economic opportunities that the oil and gas-rich country has 77 million inhabitants.


The political and economic relations and regional developments such as the conflict in Syria and Yemen will be discussed in the meeting between Zarif and Koenders. The human rights on the agenda. In April grabbed the Iranian authorities Sabri Hassanpour that also next to the Iranian has a Dutch passport.