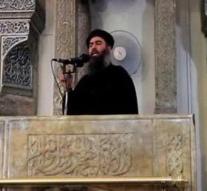 ankara - Iran is sure that the leader of Islamic State Abu Bakr al-Baghdadi no longer lives. A representative of Iranian leader Ayatollah Ali Khamenei at a special military unit said Thursday to Iran's Iranian State Press Office that Al-Baghdadi is 'definitely dead'.

The Iraqi al-Baghdadi has been extinguished several times since he was calling the caliph in a mosque in Iraqi Mosul in 2014.

Earlier this month, Russia reported that its armed forces were able to kill him in an attack on IS headings in the vicinity of the Syrian city of Raqqa in May. Moscow could not get a confirmation.

It is not clear what information Iran is based on.