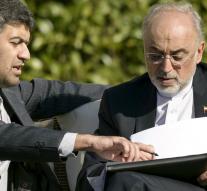 tehran - Iran, as agreed with major powers, enriched uranium sent to Russia. The head of the Iranian nuclear projects, Ali Akbar Salehi, has confirmed this Monday. It is an important part of the agreements Iran has made in July to get rid of international sanctions.

Iran has 9000 kilograms of lightly enriched uranium sent to Russia. In return, Russia sends' yellowcake, a uranium concentrate from uranium ore mine, in Iran as a base for fuel for the nuclear power plant.