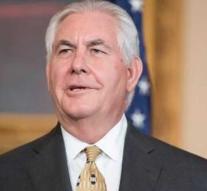 washington - The theme of Iran will dominate a large part of the talks next week during a visit by the US Secretary of State, Rex Tillerson, London, Paris, Warsaw and Davos.

'Inevitably, Iran will dominate a large part of the talks that the minister has with our NATO allies and partners in Europe,' a senior official from the US Department of State said Friday to reporters.

'We are really emphasizing close cooperation with the British, in particular, and the French in our efforts to close the gaps (in the nuclear deal with Iran) and in the next steps to the Iranian evil influence in the (Middle East) region. to contain. I think that will have a very high priority in his conversation. 'The official spoke on condition of anonymity.

Tillerson arrives in London on Sunday. He replaces US President Donald Trump who canceled his visit. Tillerson is expected to officially open the new US embassy in London.