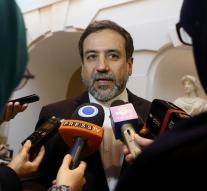 - Iran expects to execute the historic nuclear deal with six world powers later this year. The agreement provides for the dismantling of Iran's nuclear program in exchange for relief from sanctions against the country . That said, Iran's top nuclear negotiator Abbas Araqchi Monday after meeting with top officials from the United States, Russia, China , Britain , Germany and France in Vienna.

" Hopefully we have to know the end of this year, the date of implementation ", let Araqchi. The Iranian parliament approved earlier this month under the contract conditions with the six world powers and the EU has been good.

The parliament decided that international inspectors limited access military complexes. The United States and the European Union took Sunday formal legal steps that will lift the sanctions once Iran complies with certain conditions, such as drastically reducing the number of centrifuges used to enrich uranium.

Asked whether Iran had already begun putting centrifuges in mothballs, Araqchi said that process had not yet begun. " We need an order from the president of Iran's Atomic Energy Organisation to start the task. This happens after some preparations that we need to do in the coming days. So it can quickly start ", insured Araqchi.