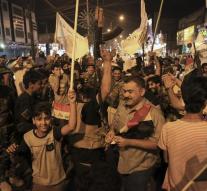 teheran - Iran congratulated the 'brave' Iraqi people and the government in Baghdad on Sunday with the liberation of the city of Mosul. Sunday the last warriors of Islamic state were expelled from the city.

'If the Iraqis work together, they can reach everything,' said Foreign Minister Mohammad Javad Zarif on Twitter.

Iran and Iraq share a 1400 kilometer long border. Against the Sunni IS in Iraq, Shiite militia also fights, many of which are closely linked with Shiite Iran. Also Iraqi Prime Minister Haider Al-Abadi is a shiite.