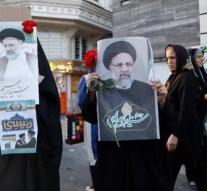 teheran - Iran chooses a president on Friday and chooses further reform or return to a hard line that economically exploits the country. The choice is mainly between current president Hassan Rohani (68) and an 'ultra' among the mighty clerics, Ebrahim Raisi (56). The choice is not democratic because the ruling clergy has forbidden most candidates to participate in advance.

But the tall age of the man who has the last word in Iran since 1989, not the president, but spiritual leader Ayatollah Ali Khamenei, 78, makes the election exciting. At the death of Khamenei, the president will greatly influence his succession. Raisi allegedly wants to be the successor himself.

Reverend Rohani is entitled to re-election because he has dragged his country from a fierce isolation. He concluded an agreement with major powers in 2015 that the blown economy had to revitalize. Iran began to develop less nuclear activities and invested again in the oily country.

Numerous international sanctions have been abolished, but the US continues to apply their own sanctions, which prevents others from investing in Iran. Rohani can say from few of his promises that they have been met. Unemployment has increased after the 'nuclear deal' and the tens of billions of euros on foreign investment have remained. If nobody gets a majority on Friday, there is a second round on May 26th.