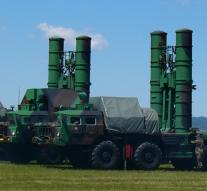 moscow - Iran has signed an agreement with Russia for the sale of Russian S- 300 antiaircraft missiles, Russian media reported Monday. The Russian arms industry apparently does good business in the Middle East. Interfax news agency reported Monday that Russia will sell a new version of the same missile, the S- 400, to Saudi Arabia.

A spokesman for the Kremlin more countries are interested for Russian anti-aircraft missiles. Egypt and Algeria are interested in a Russian system, ODS, that planes and helicopters helps to protect against missiles, according to news agency Sputnik. The system board disrupts the navigation of the missile thereby misses its mark. It is still used by Russian military helicopters.