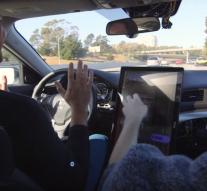 - Hacker George Hotz, best known as the first person in the iPhone and PlayStation 3 managed to crack, is alone an autonomous car to do it. For this, he created software allowing the car itself teaches how to behave on the road.

In an interview with Bloomberg Hotz says that he has a running bet with Tesla founder Elon Musk. Musk would have invited the hacker to come work for his car company, but Hotz told him not to look for a job. But he wanted the artificial intelligence used Tesla currently, Mobileye called defeat.

The autonomous car Hotz, a brand new Acura ILX, a total of $ 50. 000 killed. Most of it ($ 30. 000) was paid to the car itself, the rest went into computers and sensors. This he himself- mostly with duct tape- attached to the car.

The programming code is relatively short- according to Hotz only about 2000 lines. The car learns how to behave based on driving hours that made the programmer himself. Hotz has signed with taxi service Uber and will thus create even more hours to undergo if the car even more traffic situations. Once he thinks the vehicle has learned enough, he will give it a contest with a Tesla let engage.