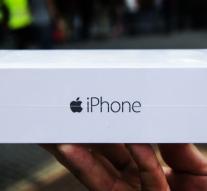 - The majority of the Dutch population now has a smartphone. The iPhone is therefore particularly popular among young people, older people often opt for a Samsung. According to a study published Sunday by Telecompaper.

According to the researchers, 84 percent of Dutch consumers a smartphone. More than one-third of teens taking an iPhone, while only 19 percent of seniors chose the Apple device. This group is market leader Samsung : Nearly half of the 65 to 80 year olds have a smartphone chose the Korean brand.