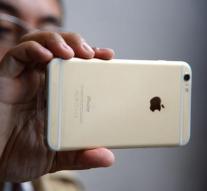 - The smaller iPhone 6c, which next year according to insiders is on the market, given the 'guts' of a high-end smartphone, claiming employees of Foxconn to MyDrivers. The new 4-inch iPhone gets according to the Chinese, 2GB of RAM and an Apple A9 processor on board. Thereby 6c beats the 'ordinary' iPhone 6 and iPhone 6 Plus.


In terms of storage space gets buyers 6c probably served the same choices as other iPhones. This gives the base model with 16GB of storage, while the most expensive version of 128GB is true. Like other iPhones 6c is also equipped with a Touch ID fingerprint scanner and thus the device is also compatible with Apple Pay.
When and if the iPhone 6c comes on the market is still uncertain, but insiders hold out that he along with the Apple Watch 2 must lie somewhere in April on the shelves.
NEW