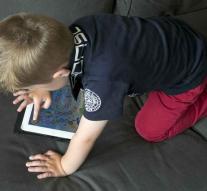 - Two years ago, warned a leading US organization for various risks and health problems that could cause use of smartphones and iPads in children and teens. Now it seems the American Academy of Pediatrics (AAP) have revised her opinion to 180 degrees. Digital media consumption may even be positive for the development of children.

Rather than keep children away from tablet and smartphone, parents should use it that their children grow up in the digital age. They can learn in technology of their children. "Parents should check with their children learn about media and they get involved. Media should be seen as a tool and not as a babysitter, reward or punishment. "

In 2013, the AAP gave parents are advised not to expose children under the age of smartphones, tablets and the like. The organization also advised to allow no TV and Internet equipment in bedrooms of children.

"Although media are not the major cause of a number of major health problems in the United States, there is clear evidence that it can make a substantial contribution and that children and teenagers can learn from, and may be affected by the media ", was warning the AAP in 2013.

Meanwhile, the organization has to put his ear listening to teachers, paediatricians, neuroscientist, researchers, media and social media experts and based on those conversations adopted a more tolerant attitude towards zomputer use by children at an early age.

The AAP is now believed that mobile devices are not a threat to the development of children, as long as they are used properly. In the new opinion the organization writes : "Digital media can be used to promote independence, self-control and problem-solving skills and improve the ability of children to follow directions. "