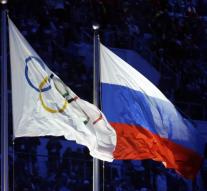 That left the organization's executive committee Saturday to know after a conference in an official statement.

The IOC welcomes the strong stance of the IAAF anti-doping, and argues that international federations have the right to exclude athletes for international competitions, including the Olympics.


The International Olympic Committee promises as much as possible to take action to get some honest as possible participants in the Games in Rio.

The IOC will use Tuesday's meeting in Lausanne to talk about countries that are not strong enough to fight against doping. The declaration of the IOC is a sharp setback for Russia, which hoped that the International Olympic Committee Tuesday would not stand behind the IAAF and would decide to admit yet Russian athletes at the Games.

Yet it is not entirely excluded that Russian athletes arrive at the Games in Rio. Because the IAAF gave Friday the door ajar for athletes who can prove that they have not been tested in recent years in Russia, but other countries with a recognized anti-doping policy. They may be able to participate in Rio under a neutral flag.

The Russian flag waving above the Olympic rings.

The international athletics federation upheld the suspension of the Russian athletics because the country was not sufficiently broken in recent months with the drug culture that was prevalent in the country. Therefore, the Russians are not welcome at the European Championships in Amsterdam.