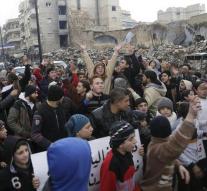 geneve - The UN has called on the Syrian government and opposition parties for peace talks, which begin Friday in Geneva. That left the organization Tuesday. However, it was not told who exactly invited.

Big question is therefore primarily who regaled behalf of the opposition and how many of the groups will participate. A spokesman for the UN will be known who the participants after the parties have confirmed their attendance.