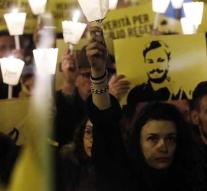 rome - Italian prosecutors will investigate five members of Egyptian security units for their alleged involvement in the disappearance of the student Giulio Regeni.

Regeni, a 28-year postgraduate student at the University of Cambridge, disappeared in Cairo in January 2016. His body was found almost a week later and research showed that he had been tortured before his death.