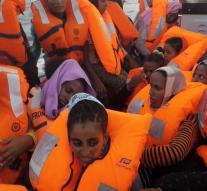 london - Europol will be studying the deadliest maritime disaster that happened last year in the Mediterranean. The European police organization that has pledged told the BBC after the British broadcaster had already overtaken the necessary facts about the failed crossing with Reuters.

The journalists spoke with survivors and relatives to find and ultimately did smugglers and traffickers who sent the vessel at sea. According to the BBC the boat departed from Egypt and not from Libya, as was assumed until now.

Definitely five hundred people died when the boat capsized at sea on April 9, 37 people on board survived. An official investigation, however, failed to materialize. According to the British Broadcasting happens that a regular basis. Countries often do not feel responsible for what happens at sea, allowing traffickers go unpunished.

The past year drowned more than 4,700 migrants in the Mediterranean, significantly more than in previous years.