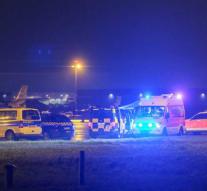 hannover - The man who hit a fence under the influence of drugs with a car on Saturday and ended up on the airport platform in Hanover, refuses to make a statement to the police.

The German police said that on Sunday. The suspect is a 21-year-old Pole who does not live in Germany. He was under the influence of drugs when he hit his BMW with Polish license plate just before 16.00 against the fence. He drove the car under a parked plane and was overpowered there.