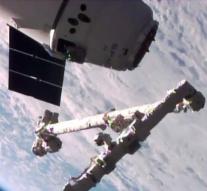 moscow - A Russian unmanned spacecraft arrived Friday at ISS International Space Station. The space capsule, MS-06, was launched on Wednesday from a rocket base in Kazakhstan.

On board is 620 kilos of fuel, 420 liters of water and 351 kilos of fuel. There are also microsatellites at the load. These are commissioned during a space walk, scheduled for August. The satellites are used to take pictures of the earth.

It is the second supply flight this year, in October another is leaving from the earth. ISS has floated around 400 kilometers above the earth for years.