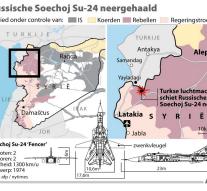 moscow - China, Britain and the US are working together with Russia to retrieve the information from the damaged black box of a Russian fighter jet that was shot down in the border of Syria and Turkey. It is currently not possible to retrieve a lot of information, because the black box is very badly damaged, said the Russian Defense Ministry Monday according to the Russian news agency Sputnik.

Turkish warplanes fired 24 November, a Russian Su-24 down because it violated Turkish airspace Ankara. Russia argues that the device over the northwest of Syria was in action against jihadists. Tensions between Turkey and Russia were already running high because Russian aircraft bombing would perform on Turkmens who fight against jihadists.