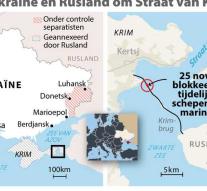 berlin - Government officials from Germany, Russia, France and Ukraine come together in Berlin on Monday to find a solution to the conflict over the Ukrainian ships that the Russians have seized. A German government spokesman has reported this. Shortly before, Minister of Foreign Affairs Heiko Maas had called on Russia and Ukraine to stop the quarrel.

NATO countries also meet on Monday to discuss the quarrel. That meeting is Monday afternoon in Brussels.