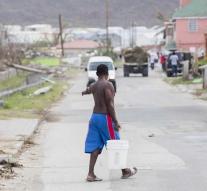 the hague - The proceeds for the collection action The Netherlands helps Sint Maarten has increased to 4.3 million euros. The donations enter giro 5125. Friday is the national day of action on radio and television for the island affected by Hurricanes.

Meanwhile, food and water distribution has begun. Residents report to help. From the Netherlands, a new red-eye relief flight of the Red Cross with 8 tons of auxiliaries, including tarpaulins and tools for repairing the houses, arrived at Curaçao.

General Director Gijs de Vries of the Dutch Red Cross is shocked at what he finds on the island. 'The ravage is huge and much help is needed. Many people lose everything and sleep in their own outdoors. '

The National Action Day The Netherlands Helps Sint Maarten is Friday from the action center at the Dutch Institute for Visual and Sound in Hilversum. Radio and TV will then pay attention to the effects of hurricane Irma throughout the day.