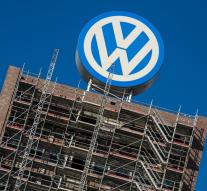 - Despite the protracted case around the shoddy emission software at Volkswagen is still running, Hollywood is interested in making a film about the scandal. Writes FoxNews.

A reorientation should help to limit the impact of the diesel scandal. Volkswagen will in Europe and the United States spend only diesel cars on the market that are equipped with the best possible technology to regulate the emission of harmful gases.

In addition, Volkswagen is betting heavily on electric and hybrid cars. An ongoing cost-cutting program is being speeded up, said Herbert Diess, CEO of the brand to which the largest European carmaker takes its name. About potential human consequences, he said nothing.

The Volkswagen Group alone is in the US a billion fine overhead because it has been tampered with emission values ​​worldwide 11 million diesel cars. The cars were equipped with software that caused it turned cleaner many times in laboratory tests than on public roads.

Volkswagen has so far 6.5 billion put aside to cover the costs of the scandal, including the daughter brands Audi, Seat and Skoda are involved. The final amount of the fines, damages and other costs can run into the tens of billions.

The affair CEO Martin Winterkorn has cost the head. He was replaced by Matthias Müller, the former boss of sports car manufacturer Porsche. Volkswagen also has the clean sweep by the management of the brands involved in the scandal.

Several German media reported Tuesday that Winterkorn under pressure from some shareholders also lays down his remaining positions at Volkswagen. In particular his chairmanship at Porsche SE, the holding company that owns more than half of the shares, is controversial because he was in that role much influence on the car group.